It all depends on how you tell the story, the man thought, staring blindly out of the bedroom window into his dawning birthday. It could be a story of success or it could be one of failure. But the main thing might be that it is a story, not what it says. He retreated into the room and started searching for his socks. Two kinds of stories, but I have forgotten how to distinguish between them. One is a sad one and one is a merry one, but which is which? At any rate, mine is a story, and it lasted for 39 years now. Is that merry already? He picked up one of his socks, and out of a sudden impulse held it to his nose, trumpeting quietly and stepping onto the bed. Does this make it worse? But shortly the sock’s smell was too much and he let go of it, standing on his bed, naked and motionless and felt pathetic.

That very same moment, quite a way off, another man felt not as much pathetic as he felt uncomfortable. Being locked between his sweating competition and elephant Tuffi was bad enough, but being stuck there on a windless, hot day like this was almost too much. The Wupper glittered invitingly in the sun, but it was eight meters below the platform, no more than knee-deep, and he didn’t dare jump. He had to cover that ridiculous elephant for the interested public instead.
Ist das ein Afrikanischer oder ein Indischer, the competition asked, and the journalist shrugged. He didn’t care whether the elephant came from the moon or from hell, but he was quite sure that they had picked the smellier variant for their publicity show. He didn’t quite understand what the point of the whole thing was: To carry an elephant through Wuppertal on a car of the Schwebebahn, high above the river, when every sensible beast - and man, at that - should be merrily splashing in its waters meters below. Of course he wasn’t supposed to understand. He was supposed to cover.
Just like, he thought, dizzy from the heat and intimidated by the wandering trunk of the beast (which for his taste was standing much to close to him), there are two different kinds of elephants (I forgot what the difference between them was) there are two different uses an adventuring human could make of an elephants trunk, depending on his sex. The journalist didn’t realize how awkward this thought was grammatically, but it was only 1950, he was staring at the end of the elephant’s trunk coming closer and he was thinking it in German, so he can be excused. Just before the trunk reached his pockets, where no doubt it would have tried to do some mischief, finally the circus official arrived (wearing a red nose, as the journalist meticulously noted), delivered a miserable and pathetic address, which they all applauded to, and finally ushered the elephant into the schwebebahncar. Click went all the journalist’s cameras as the elephant entered the car. Warum fahren wir nicht mit, someone said. It was an idea none of them liked, but they did it anyway, all pushing in behind Tuffi. The door closed, and with a metallic jerk and a whining noise the car started. To his horror the journalist felt the trunk on his thighs, but there was nowhere to run, so he kept quiet. 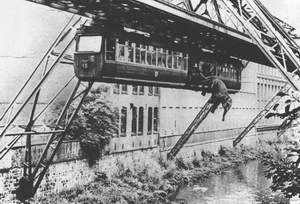 That very same moment the sock-man was back to staring out of his window, wearing one sock on his left foot now, but very much naked still otherwise. I have to write the story myself, he thought, then at least I’ll know whether it’s sad or not. I have to write a book. He slowly pulled the other sock over his trunk, trumpeting and giggling silently. ‘The Knitted Bride’ I shall call it, he thought, although it’s certainly to soon to decide upon a title. I shall have to write it first. Distractedly he wagged the sock around. ‘What’s keeping you, Herbert’, Corinne demanded from below. Herbert startled and let go of the sock, which sailed away at an oblique angle.
‘I’m writing a book’, he replied. ‘It is called "The Artificial Sock".’
The journalist stared down 10 meters into the knee deep water of the Wupper, into which Tuffi the elephant had fallen after breaking open and being frightened out of the suspension railway car by a pack of sweating scribblers. The elephant sat in the slowly passing water, seemingly unimpressed by her accident, and filled her trunk. Then she started squirting and didn’t stop until her whole world was drowned.

Herbert Marshall McLuhan did write his book and called it ‘The Mechanical Bride’. It was quite a success. It didn’t appear before his 40th birthday. Tuffi the elephant, apart from a small scar, was quite unharmed and pursued her circus career, becoming famous for stealing things out of peoples’ purses. To honor the memory of her great accident a line of dairy products was named after her after she died. The above events occurred on the 21st of July 1950, and just as I told them. I swear this by my trunk.